Note: All photographs used to illustrate this post are mine, all rights to which I reserve. 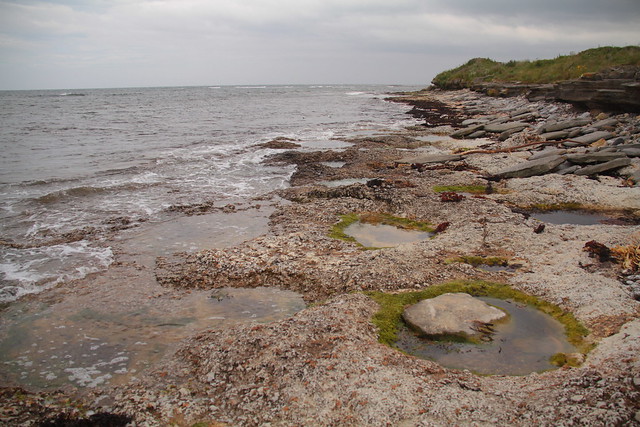 Last week, I went for a walk to Barns Ness to photograph some of the fossils that are embedded along the shore. While I was there, I was contemplating a rather vexing problem: how does one picture deep time? How does one capture in an exposure that is a small fraction of a second an expanse of time that spans several hundreds of millions of years into the past and perhaps an equal length of time into the future?

Picturing deep time has two intertwined aspects: the first is literally the problem of composing a picture which represents this time scale and the second is being able to imagine what this concept of deep time means. The two are both complimentary and in tension: framing a picture that attempts to encapsulate something that is this vast is on one level an attempt to think through this experience and make sense of it, while on another level this framing is also an attempt to contain its meaning, to dominate the depth of this geological time through an epistemic or aesthetic mode that is by its nature instantaneous.

I tried this once before: I had come here last year on a field trip with one of my courses during my Masters degree. This was an encounter with deep time which I found provocative and troubling, and it stayed with me long enough to make me want to visit again. I only managed to muster the time and motivation this late. The aesthetic and epistemic challenge that such an encounter poses are both difficult and enticing. I think the phrase ‘deep time’ was an illuminating starting point, the idea of depth implying something submerged or subterranean, something beneath the surface. While, given my limited abilities, I struggled to think of a way to compose a landscape shot of Barns Ness in a way that adequately reflected this depth of time, I liked the idea of working with this difference between the visible and what is beneath the surface, as if to resolve the tension between what is instantaneous — the present image — and what the objects in the image imply — several epochs of geological time that it took to form them. 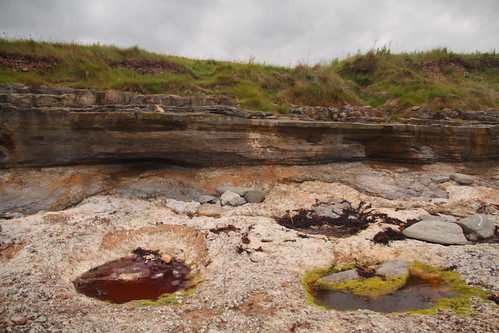 One image that has stuck with me has been of the circular hollows in the limestone caused by what used to be a tree roots from a tropical rainforest in the carboniferous period, back when Scotland used to be part of a larger, equatorial landmass 320 million years ago (mya). The hollows are absence that evokes what used to be here in the deep past. While this past is not immediately visible, it is implied by the features of the coastline or the fossils that it has embedded within it. 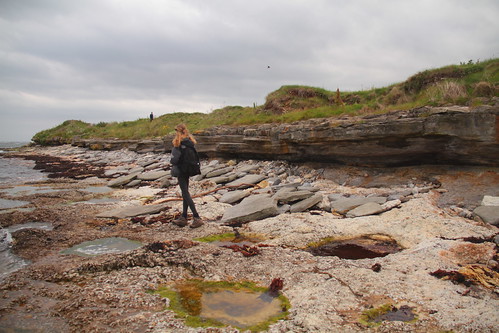 The hollows make this absence and the apparent tension between the visible and implied most salient. However, there is a sense in which the various fossilised corals around the shore also represent a similar deep geological history. Most of the limestone in the area are fossilised coral reefs, and when juxtaposed with the fossilised rainforest from the carboniferous period it reflects a landscape which, over the scale of so many hundreds of millions of years, has been shifting and dynamic. While it does not quite represent an absence or the recurrence of some repressed past, there is a sense of the uncanny in the way in which it resembles a coral but is instead a fossilised remnant of it. 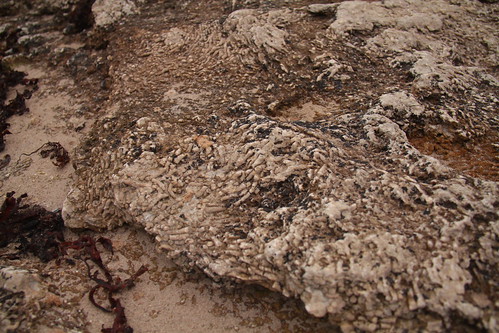 But considering these tensions between the visible and the implied, the present and the absent, and the natural and the uncanny, my way of seeing these aspects of deep time was predominantly unsettling: the deep geological past is something that haunts the present beneath its surface. This past is immanent in the landscape. But equally, there is a sense in which the present is unsettled by the prospect of the future: there is a sense in which we will be haunting the future in the same way that the past haunts us because of the objects and traces of our lives that we leave behind. One of the most immediate material aspects of this change is the ubiquitous contamination of marine ecosystems by plastics, to the point where plastic is beginning to be dispersed within the sedimentation and fossilisation processes. Plastic pollution is becoming a stratigraphic indicator of the Anthropocene (see Zalasiewicz, et al). This is why I thought it rather apposite to see plastic objects — a child’s beach bucket and a Frisbee being carried by a dog — washed ashore and littered alongside these fossils. 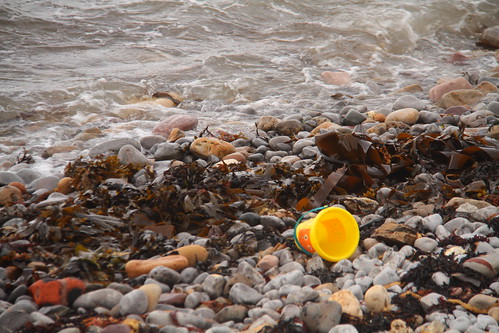 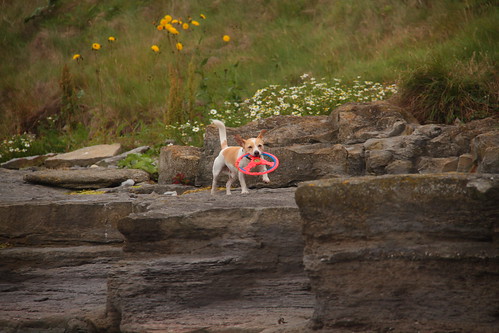 Some other images that stuck out were the stones with piddock burrows, showing how these rocks are themselves living spaces within a larger ecosystem. I can say the same for the algae and moss growing inside the puddles that collected within the tree hollows, which are lived spaces as much as they are images of absence. Likewise, as dogs retrieve these plastic objects that will haunt the distant future, or as children make sandcastles on the beach, these spaces become contact points between different temporalities: deep geological time, human and non-human life and society, living ecosystems and the persisting hazard of plastic contamination. This seems to ground a broader sense of deep time, rendering it not as something spooky that is diffused within these landscapes, but as something that connects and implicates everyone (albeit in ways that are not uniform). 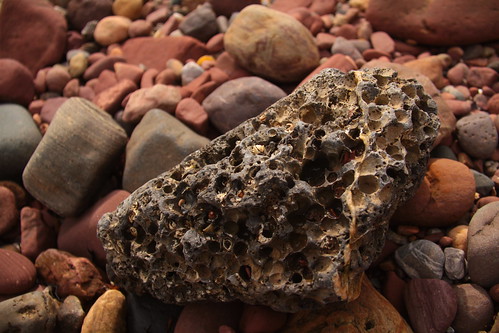 But thinking through all this, I get the sense that these pictures of deep time are not just unsettling, but that there is a further need for them to be fundamentally unsettled. There can be no easy picture of deep time, and there shouldn’t be. It is a concept that is fundamentally discomforting to deal with because of its sense of haunting by a geological past, the overwhelming ethical burden towards the future in such precarious times, its immanence within every geological feature and the tension between what is apparent and what is beneath the surface. So this encounter with deep time, and this attempt at thinking through it through pictures, always takes on a mode that tries at some level to negate itself: alluding to absence or the uncanny, a geological past of hundreds of millions of years disrupting the instantaneous present of a 1/250 s exposure, or an expanse of time that is incomprehensible within human experience alone and overwhelms the imagination. And while this is hardly a profound way of representing this, I took a picture in which I tried to follow the tilt and the striated pattern of the layers of sandstone in one of the outcrops by tilting the camera, which resulted in a skewing of the horizon, a small exercise in seeing how following the lines of deep time can change our perspective of the present. 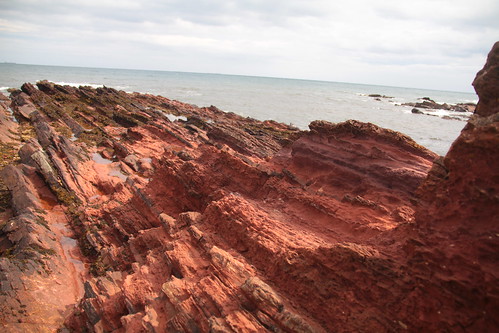 Acknowledgements: First and foremost, my thanks to David Farrier for taking everyone on the Green Thoughts course last year on this field trip. Then my thanks to fellow korfball-player Christie Smillie for her explanation of Caledonian orogeny. And, of course, my thanks to fellow postgraduate and Environmental Humanities enthusiast Katy Lewis Hood for coming along and helping offer a sense of scale and perspective on all matters deep time.

This site uses Akismet to reduce spam. Learn how your comment data is processed.

Except where stated otherwise:

1. I am the author/creator of all work posted on this blog.

2. All writing on this blog is licensed under a Creative Commons Attribution-NonCommercial-ShareAlike 4.0 International License.

3. All photographs on this blog are by me, for which I reserve all rights.